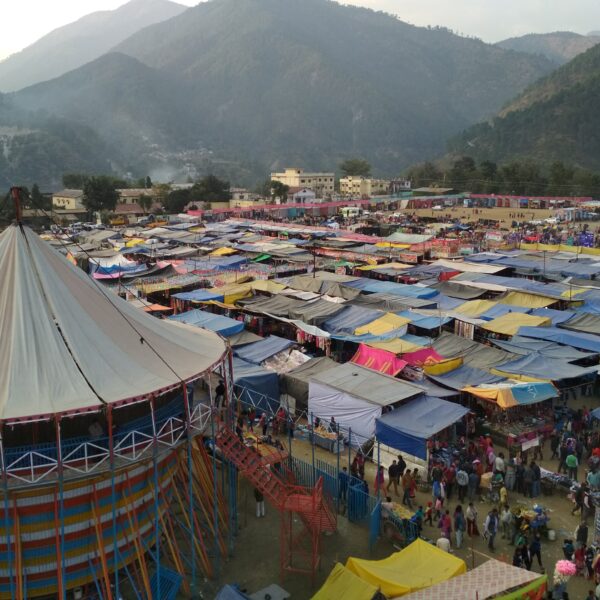 Gauchar – A Hilly town located in Karanprayag Tehsil of Chamoli district in Uttarakhand State of India. Gauchar is famous for Gauchar fair and Gauchar Airport. The Gauchar valley is also known as Valley of flat lands, located on the left bank of river Alaknanda. Gauchar lies in between Rudraprayag and Karanprayag on Badrinath route NH58. Gauchar is surrounded by 7 hills. Gauchar is well known for a historic trade fair known as Gauchar Mela.

Gauchar fair is basically a cultural and trade related fair which has been held for decades in the garhwal region of Uttarakhand. Gauchar Mela of Uttarakhand is a great attraction point for local peoples and other traders all around the state. Gauchar fair is held on 14 of November every year. This fair is basically a trade and industrial fair, where traders from different states come to Gauchar to sell their products. The fair basically holds 2 types of themes: sports and cultural activities. Sports activities are done in daytime and cultural activities are held in the evening, in which different schools participate and win prizes.

Gauchar mela is a historic trade fair held on 14th of November every year in the Gauchar town of Chamoli district. Gauchar town falls en route to Badrinath temple. The first version of Gauchar Mela was organized in the year 1943, so you can imagine how historic this fair is. This fair was basically established between India and Tibet to increase trade. Gauchar mela is one of the attraction points and hundreds and thousands of people visit Gauchar every year on the ocassion of Gauchar Mela. There are many other places near Gauchar you can consider visiting.

At that time, the trade was one-sided and carried by the Bhotias(in amount), who inhabit the frontiers of Chamoli Garhwal. But in winters the whole region is covered by heavy snow due to high altitude and these people migrate to lower regions(Joshimath) in winters for 6 months.

The fair helped Bhotia peoples to sell their woolen clothes, handicrafts, spices(faran the famous spice) and other stuffs and buy the raw materials for the next summer trade across the Indo – Tibeten borders. It was not only a local fair or fair between the peoples of Uttarakhand and Bhotia’s, people from all over north Indian states like Uttar Pradesh(UP), Punjab attended it.

After India’s independence(165 August 1947) Gauchar mela was organized by the UP government and in 2000 Uttaranchal was separated from UP and after that the fair was organized by the Uttarakhand government as an industrial, cultural and development fair. It is the biggest fairs of the region for the promotion of trade and culture. All the departments of the state government participate in this annual event and showcase their agricultural methods and techniques.